Меню сайта
Вход на сайт
Мои сайты о бридже
Статистика
Онлайн всего: 1
Гостей: 1
Пользователей: 0
Друзья сайта
Now I will continue the story about the qualifying games, which were played in tandem with the professor. And here is the alignment, after which the coach of the Italian national team no longer doubted who to call on the team: 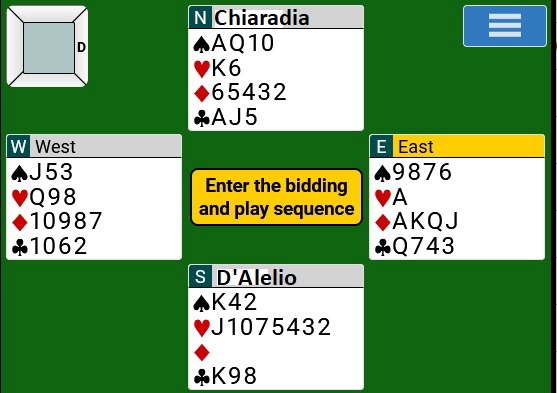 E opened first: his 2 of Diamonds showed three colors and at least 16 PCs. The D'Alelio - Chiaradia pair did not have much strength in figures. However D`Alelio decided to play the slam in Hearts. 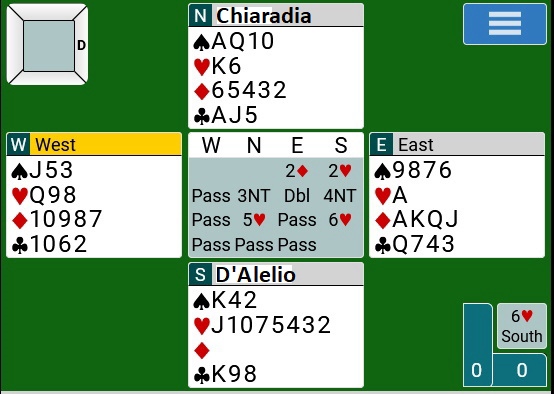 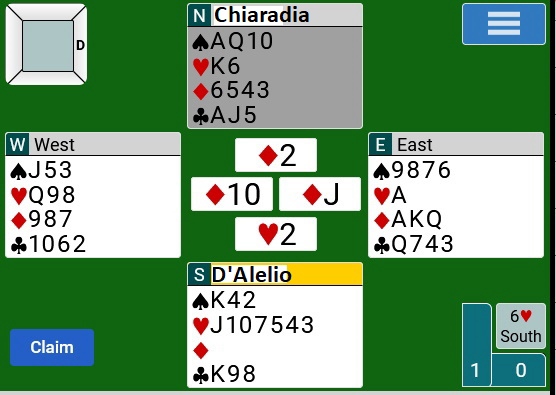 Declarer D'Alelio (S) ruffed with a trump card and played with a small Spade, impassing with a 10 of Spades. 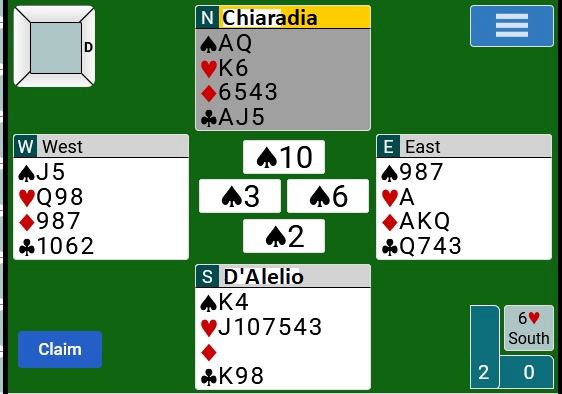 Then he ruffed a Diamond card again 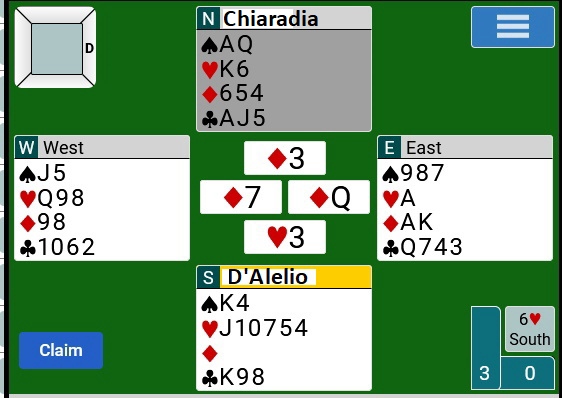 Lead small Spade and took it with Dummy`s Queen of Spades. 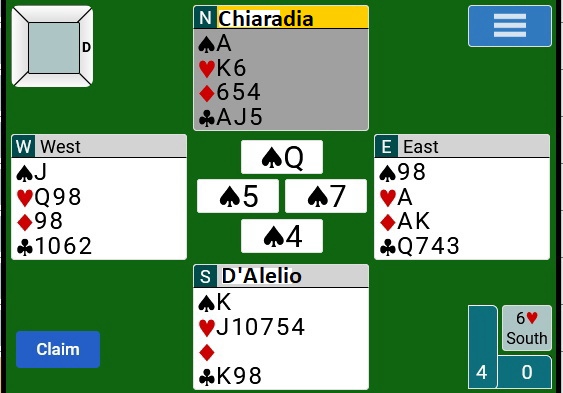 Then he leads Jack of Clubs 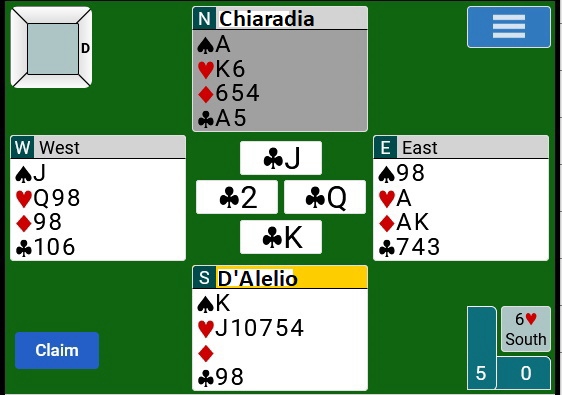 E put on Queen and D'Alelio took the trick with King of Clubs.

Then he played 9 of Clubs. 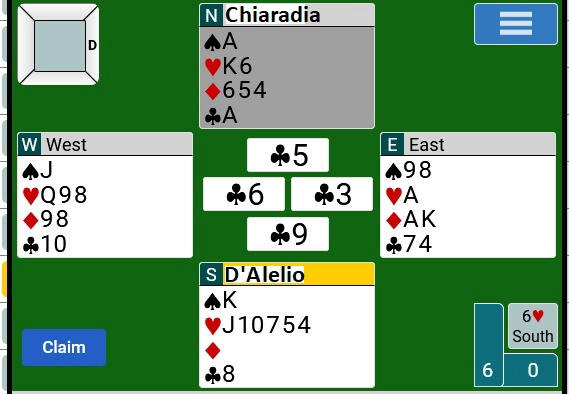 Then he leads in Clubs and took the trick with Dummy`s Ace. 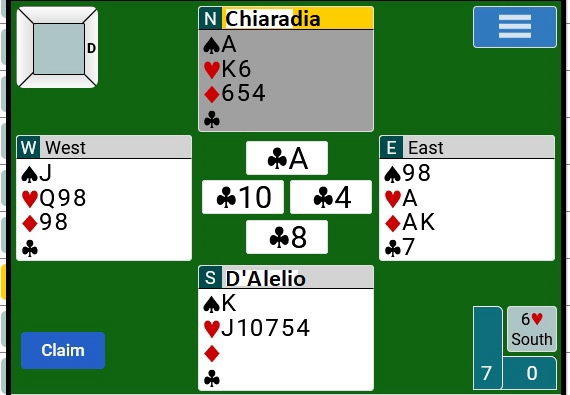 And ruffed Diamond with trump again. 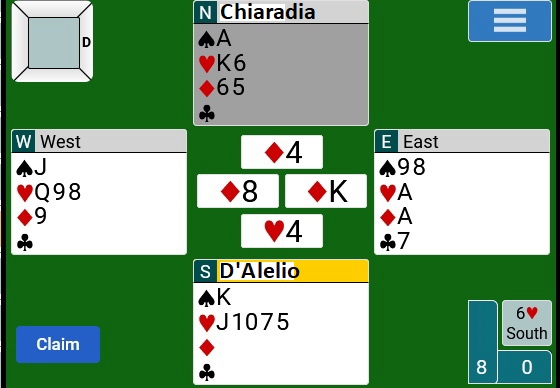 He leads with King of Spades and took the trick with Dummy`s Ace. 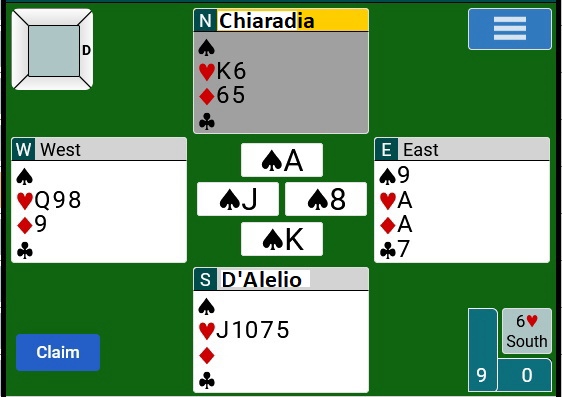 And ruffed the Diamond with a trump card again, leading to the ending: 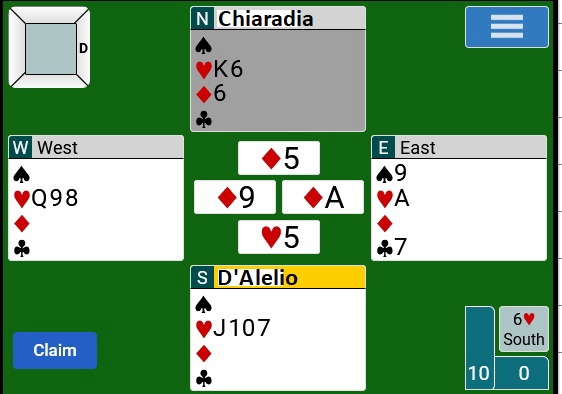 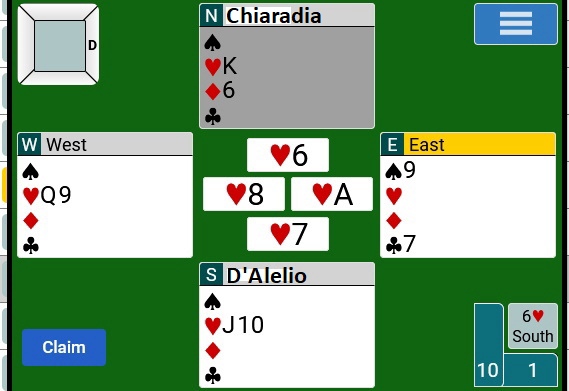 Now E has no trump cards and his lead, which leaves the partner's trump Queen without a trick. 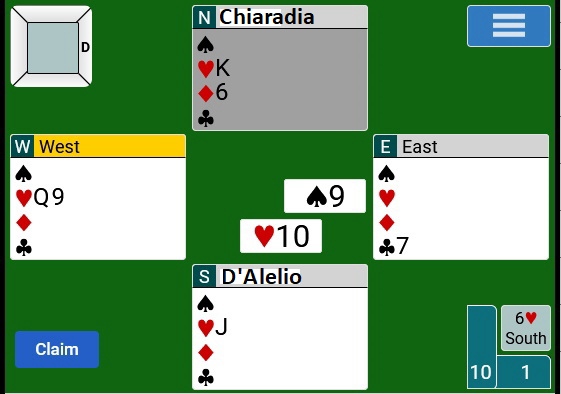 The problem slam was won. 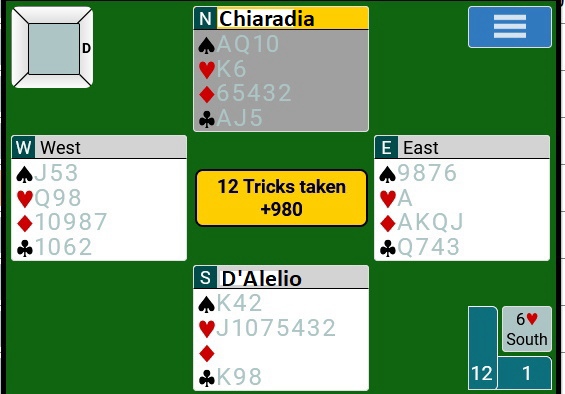 “What a phenomenal lucky guy !?” - the voices of the fans sounded.

But Perroux had a different opinion and examined the "lucky one" in detail.

D'Alelio answered: “This is simple. Though I was hoping to find a marry of hearts and some other honours besides Aces from my partner”.

And then he finished modestly:  “E doubled 3NT, it showed that a hooking is guaranteed, all the senior figures could only be in the Diamonds, which means that my partner has no figures in this suit. Therefore, all his honours are "playing".

It seemed to me that the slam has a great chance of success.

After the Dummy`s hand opened, it became clear that E had a singlet in the Hearts, and it was an Ace. Without it, East would not have had the required 16 PCs.

I saw the possibility of winning in the "devilish maneuver".
This requires four transitions to the Dummy and therefore you have to impass Jack of Spades.

The location Queen of Clubs is also known, and 3 tricks in this suit can be taken only if W have 10 of Clubs. Fortunately, everything worked out”.

Perroux announced: “I have a full team already.”

Fans asked him: “How do you take this lucky guy?”.

Perroux replied: “Do you know what the Russian commander Suvorov, the liberator of Italy from the French, said, when the envious generals said that he won most of his battles thanks to happiness? There is happiness, there is happiness, happiness is everywhere. If only to be at the same time and a little mind”.